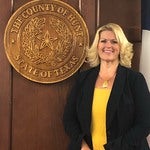 Jessica McDonald is an experienced divorce lawyer and an experienced trial attorney in all areas of criminal and family law. Jessica's primary practice is in Greenville, Hunt County, Texas.

Jessica earned her Bachelors of Science Degree in Communications from West Texas A&M University. While there she competed on the University's Forensic team, specializing in persuasive speaking.  She attended Texas Tech School of Law on an academic scholarship. While in law school she participated in both Moot Court and Mock Trial. She was the winner in the 1997 Texas Tech School of Law Mock Trial finals.  She graduated with her law degree in 1998.

Before opening her own practice, Jessica worked as a prosecutor. She has tried all types of cases, including capital murder. She has argued before three different circuit appellate courts, arguing various criminal and CPS cases. Jessica has even argued a capital murder case before the highest criminal court in Texas, the Texas Court of Criminal Appeals, a privilege and rarity for attorneys.

Jessica represented the Texas Department of Family Protective Services, prosecuting cases for the protection of abused and neglected children.  During this time she was featured in the Texas Bar Journal about her role with CPS and the importance of fostering and adopting children in need.  Jessica is also a former foster parent who adopted 4 children through CPS who were victims of child abuse and neglect.

Since starting her own law firm, Jessica has used the skills she developed as a prosecutor and her knowledge of the system to provide vigorous and skillful representation for her clients in criminal, adoption, divorce, and child custody matters.  Jessica is also skilled at legal research and writing and has had success having multiple criminal convictions overturned through her work as an appellate attorney.  One accomplishment she is most proud of is her 2018 victory in the Court of Criminal Appeals where she convinced all 9 justices of the Court of Criminal Appeals to issue a unanimous decision and reverse a criminal conviction of a client she fought hard to exonerate. https://law.justia.com/cases/texas/court-of-criminal-appeals/2018/pd-0001-17.html

Thank you for contacting us. We will get back to you shortly.

Please complete all required fields below.